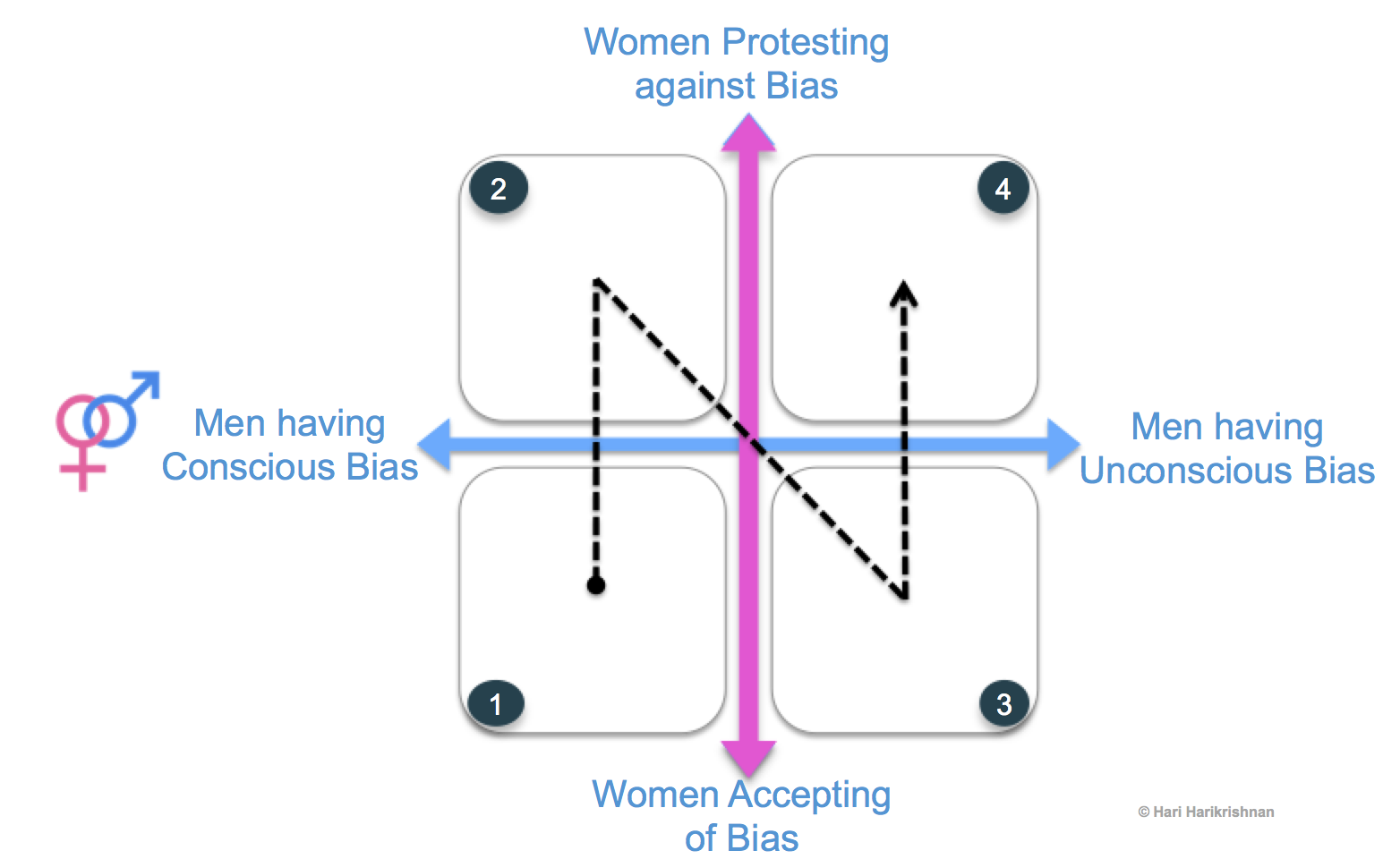 Last week we celebrated the International Women’s Day. We cheered, we lamented, we measured progress, or the lack of it. A friend quipped on whatsapp: “In 1816 women had no rights, in 1916 they had some rights, in 2016 they are always right”. On a long flight from San Francisco to Istanbul, I reflected on how gender equality has evolved over centuries, by matching the attitudes of men and women towards bias.

Then I placed women’s attitudes on a spectrum ranging from accepting bias to protesting bias. 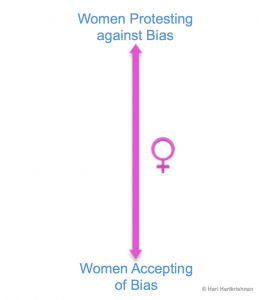 To see how women responded to men’s bias, I placed these axes together. 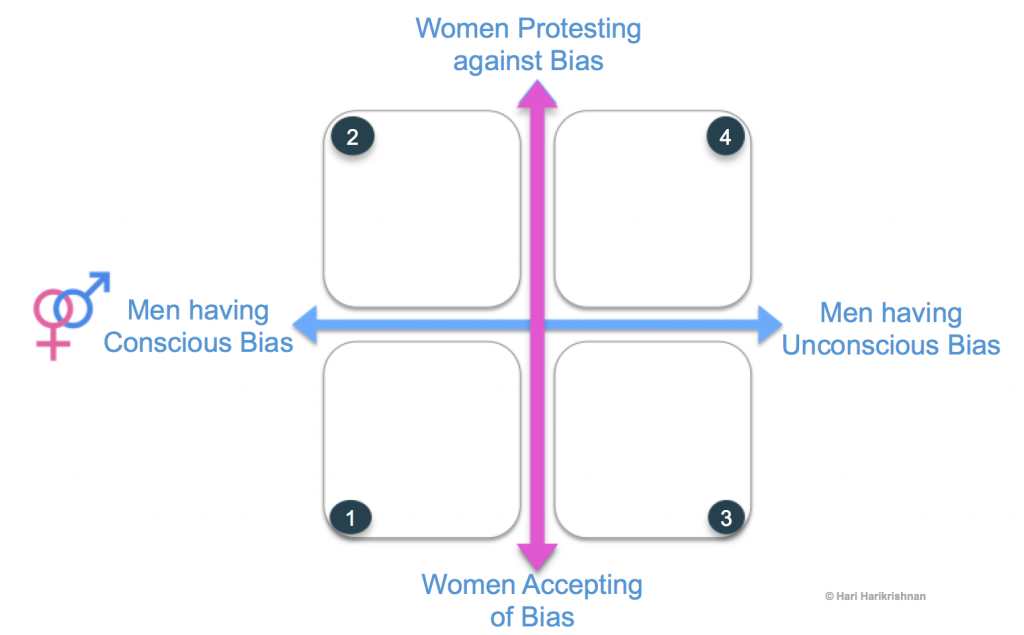 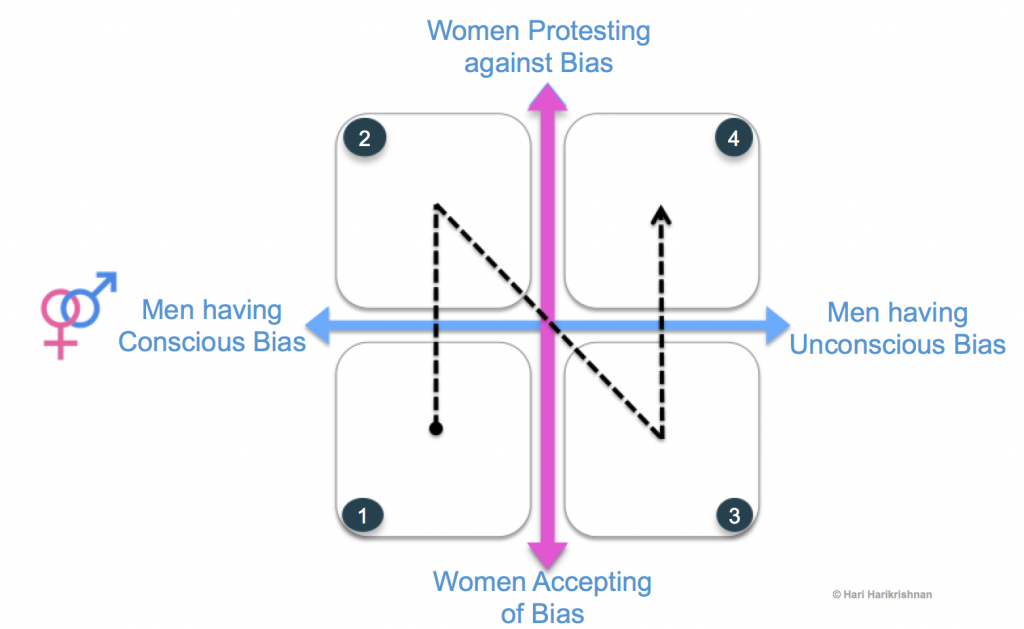 If you follow my friend’s quip above through this map, it will be as if 1816 is quadrant 2; 1916 in quadrant 3; 2016 in quadrant 4…just labels to mark time. The path blazed over centuries makes for an ominous shape – an ’N’ that seems to scream ‘no’? I think of it as the N-continuum of gender inequality.

The N-continuum is beyond simple evolution. It actually represents real progress over hundreds of years. Varied statistics from child marriage, to years of education, to health and wealth, the numbers have improved. We have world leaders who are women. But the numbers also suggest we have a long way to go. So we can’t simply be contented about the status quo. Social and economic progress such as community health and global productivity depend on continued progression towards gender equality.

The N-continuum made me wonder about how we went from a terrible state like quadrant 1 to quadrant 2. How did we arrive there? What part did men of influence play a role in the arrival or departure from that quadrant? That’s a topic for another time.

Bulk of the women’s rights activists and women of accomplishment fall in to quadrant 2 in the last century or quadrant 4 in this century. While we all have women we know in our circles who come to mind for having overcome bias in their own ways, three personas come to mind when I think of gender bias. This is not to ignore the numerous others, but these have special appeal to me. You won’t see them being celebrated at your local women’s action forums. These three are from different eras, from different geographies, and from different races. They represent slices of time in the N-continuum of gender inequality.

There are many such quadrant 2 stalwarts who moved the ball so that we could outlaw conscious bias and move to quadrant 3 or 4. Most women today are in quadrant 4, protesting unconscious bias, sitting on a platform where conscious bias is illegal or frowned upon in most developed nations.

What next for the N-continuum? Just like Iron Age swept through different parts of the world at different times, these transitions through the quadrants happen in different parts of the world at different times. That explains why snapshots of progress is different in Middle East to Africa to South Asia to the West. You could map each country on this continuum based on where the majority of its women are in their response to bias. Will information technology fundamentally change businesses and societies and close the gender inequality faster? Will a digital society with pervasive connectivity of people via mobile and relentless spotlight on inequalities through data help us focus efforts to reduce bias? Here is hoping that traversal through the N-continuum is swift for generations here and beyond.

So what has all this got to do with washing machines and goddesses? I came across this sculpture at the water fountain of a San Francisco area restaurant. It depicts what looks like a roman goddess emptying a washing machine. 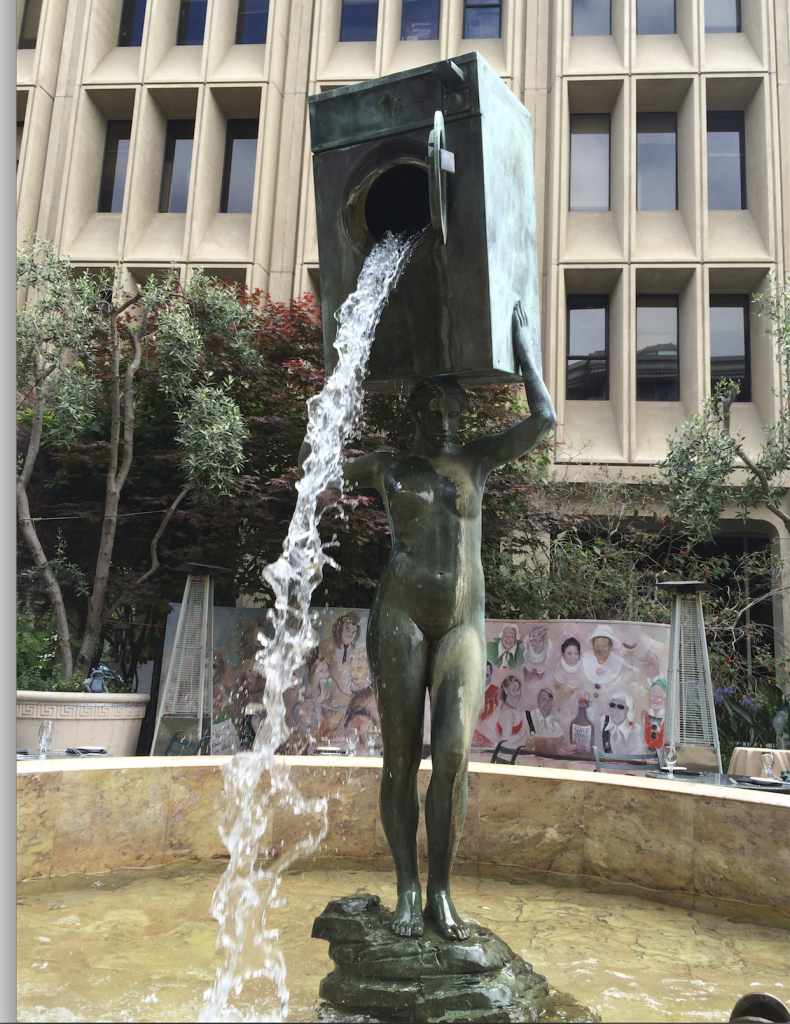 Running water made possible by indoor plumbing freed women from hard chores in the 20th century, something I always thought of as a significant technological and social milestone. Home automation of the last century via washers and dryers took it a step further. Oddly, the intended incongruity in this art – ancient goddess with a modern tool performing a household chore – is reminiscent of the lean-in discussions and nouveaux feminist activism. It reflects the reality of the 21st century women’s lives where they are balancing new conveniences with old ways of life and old biases, conscious or unconscious.

10 thoughts on “The Goddess and the Washing Machine”