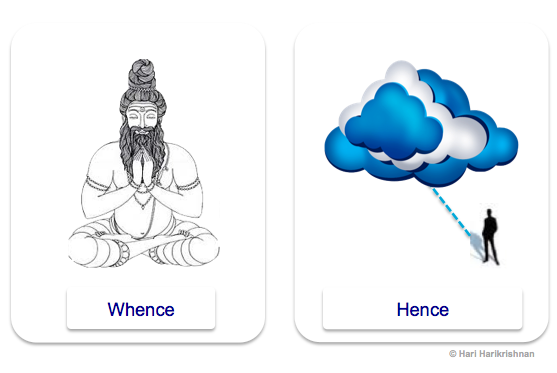 Over the history of humans, there are instances where one set of people mistook another for gods. Much disputed accounts exist of Hernan Cortez being mistaken for god by the Aztecs or Captain Cook by the Hawaiians. White men discharging firearms were construed as creating thunder and lightning. Basically, unfamiliar technology wielded by one human was seen as godly by another. Recently I came across 2012 Internet Trends Report by Mary Meeker @ Kleiner Perkins. It made me want to ramble about human progress and whether we find ourselves at the intersection of godliness, technology and spirituality.

In the report mentioned above, the authors talk about asset-light generation (you will have to skip ahead 2/3rds of the way in to the presentation); on how space, time, and money are re-configured by the new generation who relies on smart phones and Cloud. Some examples of how the asset-light generation functions is below (reproduced from the above link):

Asset-light has long been used in the world of business to reflect how companies can make smart core vs. context decisions to stay nimble and not be weighed down by owning assets or holding debt. Just-in-time or lean manufacturing being one example; outsourcing of non-core processes being another. I found the application of this to consumers novel, as a new way of doing things using cloud and smart phones.

If we are asset-light by virtue of some Heavenly Cloud, doesn’t this bring to mind a parallel where ascetic saints gave up their worldly possessions and meditated to high heavens, as shown below? Are technology & spirituality part of the same continuum?

Asset-light generation also brings to mind the indelible image portrayed a decade ago (2003) by playwright Richard Foreman viz. pancake people, to refer to a new generation dependent on the Internet for their knowledge and activities. Previous generations have relied on developing and storing knowledge in their minds (local or literally on-premise storage and retrieval of information), not possessing the capabilities or technology to access information on-demand. Newer generations have information at their fingertips and so could be deemed as having only superficial knowledge. You can find more on this in this post by Nicolas Carr titled “Is Google making us stupid?“.

Let’s bring these confusing array of notions together. Which ones are we? Pancake people, asset-light generation, or spartan spiritual beings? Perhaps we are all that. Whatever we are, I don’t think we are in danger of being eclipsed by technology. For millennia we have supplemented ourselves with technologies. No doubt these technologies have brought about profound changes in humanity, but we have adapted. Why should we carry tonnes of information in our heads when we have it at our fingertips when we need it and we can apply unique human intelligence on top of that information? Would it not make us more productive by focusing on analysis and not information storage & retrieval? Perhaps in a million years our neurons will be wired differently, more for analysis and action than for information storage.

A favourite stanza from the Rubaiyat (Edward FitzGerald version) springs to mind as I conclude this:

Then to the rolling Heav’n itself I cried,
Asking, “What Lamp had Destiny to guide
Her little Children stumbling in the Dark?”
And–“A blind understanding!” Heav’n replied.

Should we replace “A blind understanding” with “Google and Wikipedia”?