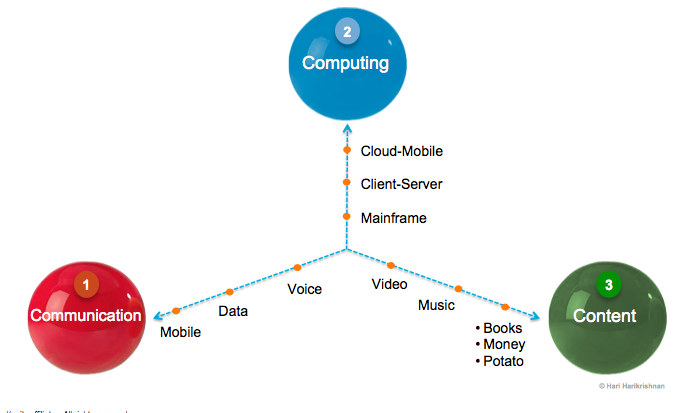 It’s a Friday night. I am perched on a cozy corner of my couch, wine on one hand, my smartphone on the other. The smart TV is on. I am pulling up House of Cards on Netflix via the phone, projecting it to the TV via Google Chromecast. Life is good! And then I start to ponder on how I came to be using computers from my couch to entertain myself; on how we arrived at Couch Computing.

How did we get here? And that too, in a seemingly short time? Cloud aficionados will say it is all due to the cloud. Smartphone fans will attribute all this convenience to these versatile handhelds. There is truth in both, but there is more. It is a journey through time on multiple technology trends, computing technologies and telecommunication technologies being the primary ones. How they have been mashed together to deliver content in various forms resulted in my couch computing. A superficial look at the 3 Cs of Couch Computing that combined to deliver my entertainment is shown below.

Let’s get past the superficial and dig for more history on how we got here. The picture below shows the historical evolution of couch computing over the last two centuries on 3 axes — communications, computing, and content delivery. Each axis depicts eras and names of inventors, influencers, or the main protagonists of the technologies or business models.

A quick look at some of those names by axis:

Looking at some of the axes together reveals how some of them served to reinforce another axis. For example, while human communications had evolved from semaphores and hand-signs from ancient ages with telegraph, we would be dependent on electrical or mechanical systems still if it were not for automation via electronics and computers. Similarly, without the powerful combination of communications and computing, content delivery would have depended on postal mail and transportation networks. Think of the quantum jump from Pryce-Jones to Bezos era and how technology transformed the old mail order business.

While I have intentionally (and perhaps arbitrarily) picked certain names from the past to name the milestones in this journey, they are by no means the only ones that contributed to this. For example, Alexander Graham Bell is known as the father of telephone. However, this article shows how inventor assignment can be tricky as in the case of Bell and contemporary inventors like Antonio Meucci and Elisha Gray. The same goes for Morse and Alfred Vail when it comes to telegraph. By no means are these the only ones responsible for these technologies. Think of the names against the dots simply as proxies for the brilliant minds who contributed to these axes.

Modern Day: Mixing up the 3 Cs

All that history is mind-boggling. But let’s look at more proximate developments in the last 50 years and see how we have evolved these technologies individually and collectively.

We can write many long stories about each axis, and longer ones on their dependence to each other. Since that would be uncharacteristic for a dummy’s guide, here are some highlights and observations on how innovation in one axis accelerated the innovation in another axis:

We live in an era where quick delivery of most virtual content is possible. Physical content deliverers are expanding their menu of offering to perishables (“potatoes direct to your couch”). Uber can get cars dispatched at our pleasure. So we have the 3Cs acting together powerfully to deliver a fourth – contentment. Assuming that computing and communications technologies continue to improve, what holds in store for the content axis? Drone-based delivery of goods for increased instant gratification for sure. What other aspects of human contentment can we improve? What other technology axes not covered here are we dependent on for furthering our satiation?