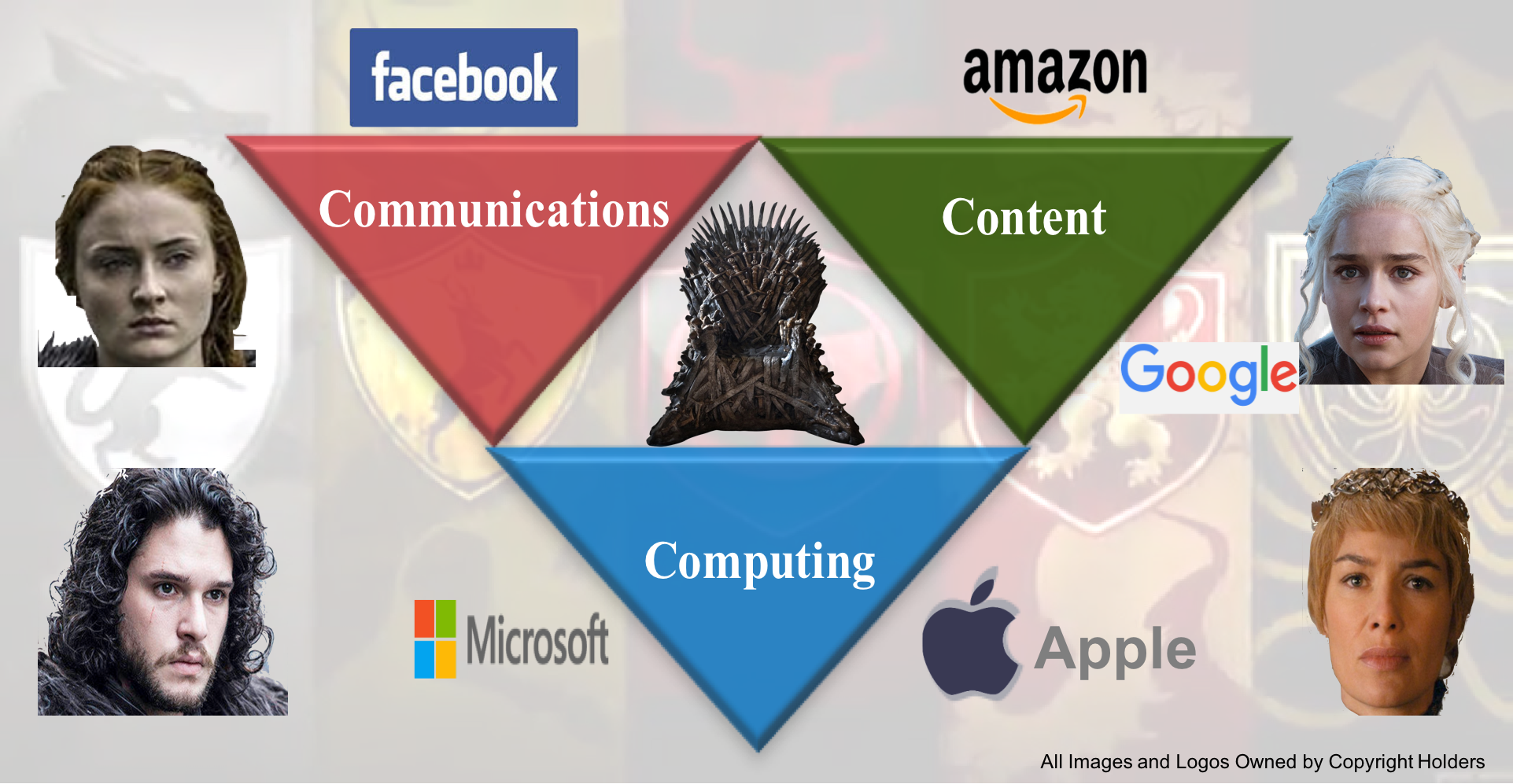 One day we hear from them about the cloud or the Internet of Things. The next day we hear about new phones, laptops, their ultra-sharpness, or about gadgets that talk back at their owners. Then off we go hearing of brain mimicry with AI (artificial intelligence), world mimicry with VR (virtual reality), or balloon-powered Internet and drone-based witchcraft.

What game of thrones are they playing? What is their playing field? What are they trying to control?

This is a look at the FMAGA and their continuing thrusts and parries through the lens of the following three C’s:

We will see how each of the FMAGA started out their play in the 3C’s battlefield, how they have evolved, and briefly how they compare with technology veterans AT&T and IBM.

Below is a depiction of our main protagonists FMAGA placed in in the 3C’s battlefield as they started their game in their home turfs (their heritage corners, so to speak).

Summary of the opening gambit of FMAGA in the three realms:

Now that we’ve pinned their starting points on the battle field, let’s look at a decade of evolution in sixty seconds.

Each player is assiduously protecting their core positions while ambitiously expanding to other realms. From each firm’s vantage point, moves towards other realms are either left or right as shown by arrows below. Yellow sticky notes show the product, the capability, or the initiative they introduced to make that move.

Acts of aggression by FMAGA, moving left or right from their original corners:

Here is a summary of the FMAGA offerings and initiatives in each realm of the 3C’s to show the middle game stage. [Note: An incomprehensive and ever-changing list].

Well, it’s a lot to process for sure, despite simplified categorization in three buckets! There is a lot more we can inventory here based on “moonshot” efforts underway in laboratories.

The battle for the 3C’s is raging hard. It feels like we are still at the cusp of bigger battles to come, built on these lego blocks.

Let us not forget last century’s behemoths yet. AT&T and IBM are shown below in their home turfs along with FMAGA.

The new AT&T is clearly attempting relevance in the new world of media and entertainment by acquiring old-world players in content creation and delivery via Time Warner and DirecTV acquisitions. [See comparison of AT&T Ma Bell and Facebook here].

IBM is trying to cope in the new computing world of cloud and AI. Can Big Blue modernize and deliver its mind-boggling array of enterprise software and collaboration products from its cloud as fast as FMAGA? Can it repeat its services-led strategy in a self-service, prefabricated technology world of cloud? Can it use Watson as the rallying cry and umbrella portfolio cover (like say, WebSphere for middleware)?

I hope the old guards give FMAGA a run for their money. Keeping the doors shut from the barbarians won’t be easy. (Note for the ardent game-of-thrones fans: As hopeful as I am about this, I hear a distant echo of the desperate “hold-the-door” cry from Hodor).

FMAGA Next: Greater or Lesser?

Unlike in Game of Thrones, we can’t time-travel to see the next decade. We can either pass off as futurists and make unprovable assertions or attempt some mild observations based on the battle for the 3Cs. One such observation is this:

The battle will intensify in the content corner where technology-enabled services in health, finance, and transportation will drive upstream innovations in computing and communications.

Big pieces of the game are in place for another decade of exciting play between the old guard in tech and industries, FMAGA, Asian giants, and as-yet-unknown new entrants. We won’t be watching from the sidelines, but will be active, if unwitting, participants in it.

Related article: Is Facebook the AT&T of the 21st Century?